Non-Representational Images of War in Film

duration: 90mins; Free entrance, but registration is mandatory on this link.

Next to a selection of films, the ENFF organizes a masterclass and film debate on the position of art of filmmaking in the times of war with filmmakersfilmmakers from Ukraine and Bosnia and Herzegovina (Sophia Bulgakova, Marta Smerechynska, video messages from Alisa Kovalenko, Natalia Libet, Lidija Zelovic). Moderated by Asja Makarevic.

A range of post-Yugoslav films produced from 2001 provides spectators with what I call non-representational images of war. These images offer innovative approaches to the collective past, while simultaneously reframing contemporary experience. They appear to offer a more dynamic relationship to the past and the present, while reflecting complex processes of the formation of collective and individual identity, memory, guilt, and responsibility. The aim of this presentation is to show how contemporary images of war shape film aesthetics in post-Yugoslav cinema, and to what extent non-representational strategies and their reception contribute to the process of reconciliation in a post-conflict society.” 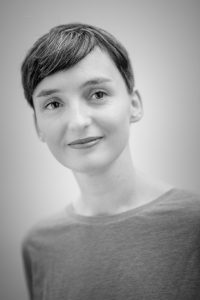 Dr. Asja Makarevic holds a BA degree in Comparative Literature and Library Science from the University of Sarajevo and a MA degree in Film Studies from the University of Amsterdam. She holds a PhD degree in Film Studies from the Goethe University, Frankfurt. Her research addresses the ongoing “post-war” condition of former Yugoslav countries and subsequent emergence of “non-representational” images of war in post-Yugoslav film. From 2009 till 2017 Asja managed Talents Sarajevo, the Sarajevo Film Festival’s networking and training platform for emerging film professionals from Southeast Europe and Southern Caucasus. In the past year she worked as a University Assistant in the Department of Media and Film Studies at the Vienna Film Academy, at mdw University for Music and Performing Arts. As of October 2022, Asja has been conducting her post-doc research at the Goethe University, Frankfurt.

Masterclass is supported by the Austrian Embassy in the Hague.