”The overarching goal of the campaign is to raise awareness in Dutch society about the genocide in Srebrenica, the role that the Netherlands has played in that tragedy, and its 25th commemoration. We hope to mobilize political and societal actors to anchor awareness about this history in different public spaces of Dutch society.”

The campaign is producing a temporary monument that will be exposed on 11th July 2020, during the national Srebrenica commemoration in The Hague. The temporary monument is a photo series roughly inspired by the artwork Bosnian Girl by Sejla Kameric. The photo series consists of twenty-five portraits of Bosnian Dutch women and men of 25 years old, made by the famous and renowned Dutch photographer Robin de Puy.

As a part of the program, together with IDFA presenting feature-length documentaries, our festival ENFF curate 4 compelling short films made by 4 young female directors from the Balkan region – the renowned Jasmila Zbanic and upcoming talents Sajra Subasic, Hanna Slak, Ines Tanovic.

Please find the full program and more information on the website:
https://srebrenicaisdutchhistory.com/

RED RUBBER BOOTS | Bosnia and Herzegovina | 2000 | Jasmila Zbanic | 18 min| In this film by Jasmila Zbanic a Bosnian mother looks for the red rubber boots of her son, who was kidnapped during the war.

STACK OF MATERIAL | Bosnia and Herzegovina | 2018 | Sajra Subasic | 7 min | A young, Bosnian filmmaker is on a mission: to make a shot of her parents house, who were forced to leave their home during the war. But her mission proves more complicated than expected.

SCREENS | Germany | 2013 | Hanna Slak | 8 min | Every year, on the 11th of July, newly identified bodies of victims are buried during the commemoration in Potocari. Screens, umbrella’s, parasols are used to protect oneself from the sun, the camera’s and unwanted gazes.

A DAY ON THE DRINA | Bosnia and Herzegovina | 2010 | Ines Tanovic | 17 min | It’s august 2010. During the repair of the turbines of a hydroelectric power plant, body remains of more than 250 incomplete skeletons are found.

All films you can stream for free here.

Photo from the film SCREENS by Hanna Slak 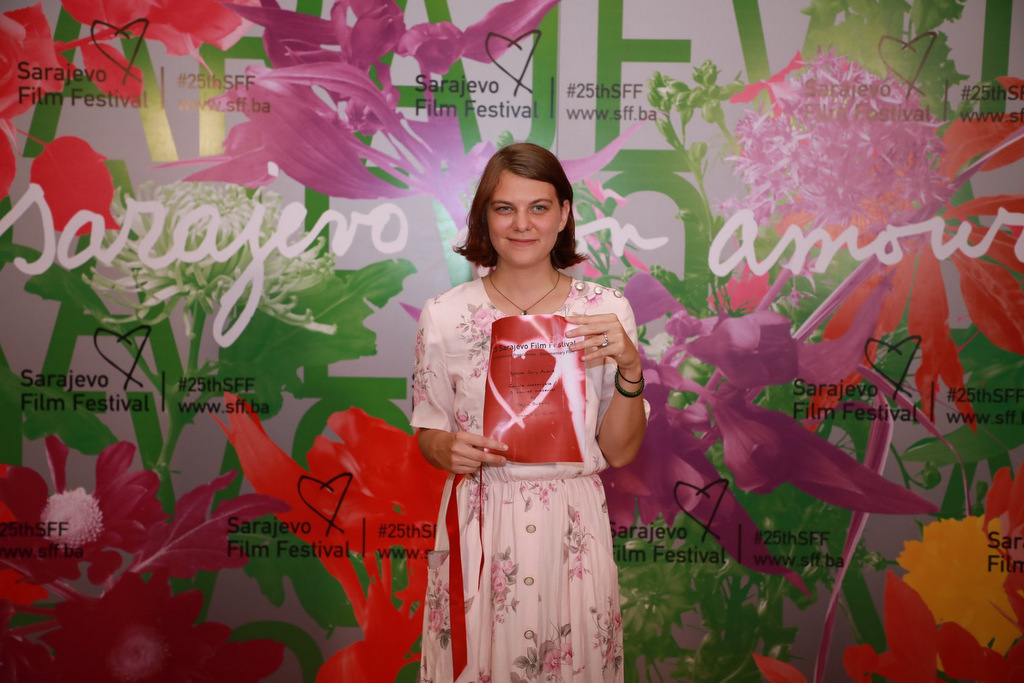 and of course, save the date!

We hope you enjoy the film selection for this moving project! We will get back to you soon to announce our side program of short films in September and October. Also keep in mind the 12th edition of the Eastern Neighbours Film Festival from 4-8 November 2020!